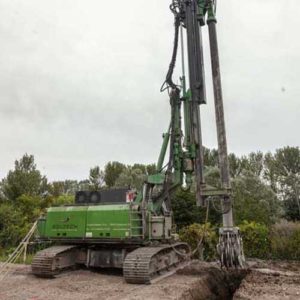 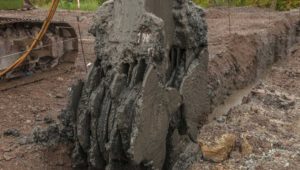 Using their controlled soil mixing technique, Deep Soil Mixing transformed the challenging site, ensuring the extensive project could be finished to a high standard – the soil had to be stabilised and any chemicals contained in the ground locked in, before Contractors Wildgoose Construction could start work on the construction of the site which would contain a public house, restaurant, coffee house, car park and access roads.

Prior to commencement on site as with all projects Deep Soil Mixing Ltd undertake rigorous testing and assessment of the ground and its suitability for soil mixing.  Laboratory tests are also undertaken using samples of the soil to be treated mixed with different proportions of a wide selection of binders to select the most appropriate mix. From these results, Deep Soil Mixing Ltd then prepare a detailed specification.

On the Runcorn project, Deep Soil Mixing Ltd installed soil mixing panels across the site as well as a soil mixed mattress and soil mixed wall next to a Major Accident Hazard Pipeline (MAHP), to lock in chemicals and prevent leachate to ensure the ground was stabilised for the building works to commence.

“The site was heavily contaminated and situated in close proximity to a MAHP and an adjacent canal embankment which was unstable, so we had quite a challenge on our hands,” says Colin Critchlow, Director at Deep Soil Mixing Ltd.

A cutter soil mixing head is a machine used to mix the ground, particularly when needed at greater depths and in densely consolidated soils. It achieves a greater level of density compared to other soil mixing methods and is highly effective.

In addition to installing the soil mixed panels, mattress and wall, the company also soil mixed the building foundations.

“We needed to lock in chemicals within the original site as well as reduce the levels of vibrations to a nearby gas pipeline and an adjacent canal embankment which was unstable,” adds Colin Critchlow.

“Thanks to our wide range of experience, we’re used to working on challenging sites like this one.

“The high-pressure gas mains pipe was charged at 30 Bar and was located within two metres of the site – we used vibration monitors throughout the project to measure the frequency transfer to confirm all met National Grid safety requirements.

“We’re proud of everything we achieved on this project, especially given how heavily contaminated with an assortment of chemicals the site was – not to mention unstable. Thanks to the different soil mixing techniques, we secured the site and enabled the complex of restaurant, pub and coffee shop to be built alongside a car park and access roads.”

The Runcorn Neptune project started in May 2016 and was completed in December 2016.