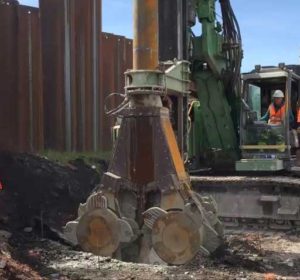 Deep Soil Mixing Ltd has commenced work on the prestigious new Mersey Gateway project between Widnes and Runcorn in Cheshire for Merseylink CCJV.

The work being undertaken by Deep Soil Mixing Ltd is the innovative ground engineering and soil stabilisation method of soil mixing using a 10 tonne Soil Mixing Cutting head mounted on a 65 tonne RTG rig.   This is the first time this bi-rotational mixing head has been used for soil mixing in the UK.  The use of this technology follows trials carried out by the Deep Soil Mixing team over the last few months on behalf of Merseylink CCJV.

Following the trials, Deep Soil Mixing was awarded the multi million pound project to install over 1800 soil mixed panels at a number of locations across the north landside area of the Mersey Gateway project and these panels are designed to stabilise the ground in areas around the various bridge structures so that further construction work can be undertaken.

The contractor, Merseylink CCJV, has chosen to undertake soil mixing on areas of the Mersey Gateway project due to the benefits soil mixing technology brings. Soil mixing is more environmentally friendly, flexible and adaptable than most other ground improvement methods. Benefits of the technology also include reducing the carbon footprint. Soil mixing improves the geotechnical qualities of the existing soils by re-engineering the soil in-situ thus removing the need to excavate or import fill. There is no leaching or binder migration during the installation process, or later as the mixed soil ages and substantially helps to lock in any potential chemical contaminants present within the soils.

By mechanically mixing the existing soil with a cementitious binder, deep soil mixing changes the characteristics of weak soil to achieve a geotechnically modified material for numerous applications. This enables more efficient and effective installation and greater ground stability.

Furthermore, as soil mixing reduces the carbon footprint, this has enabled the project partners to meet key environmental targets.  Using the system of soil mixed panels for soil stabilisation on this project has meant that no ground improvement material was imported and more importantly none left the site.

If you would like to know more about the cutter soil mixer and soil mixing please get in touch.