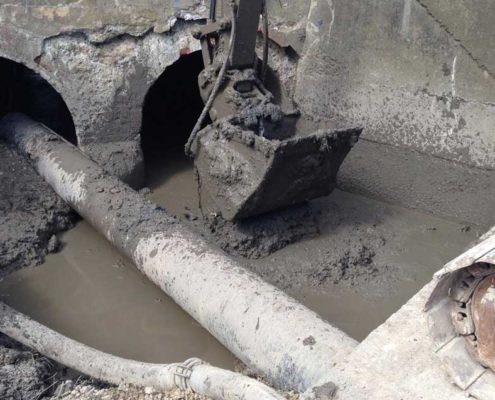 Network Rail needed to reduce embankment slope on a series of culverts on part of the Leeds to York railway line, this required the initial extension to the length of these culverts.  The ground conditions in the bed of these streams were predictably of a very poor quality and not capable of supporting any new structures. Piling in such remote sites would be very challenging for mobilisation alone,  Deep Soil Mixing Ltd put forward a proposal for solving the problem which consisted of mass mixing the ground on which to the extend the proposed culvert and embankments.

The project was complicated as Deep Soil Mixing Ltd had to ensure that existing headwalls were not undermined so the mass mixing was carefully carried out in small cells to prevent any potential movement.

Further complication was the culverts were actually designed to carry small rivers so the problem of maintaining flows in a very high risk flood area needed to be addressed with temporary dams and overpumping.  Not only did Deep Soil Mixing Ltd carry out the soil mixing works but also carried out the majority of the associated civil engineering works to reline, grout up and extend the culverts and embankments.