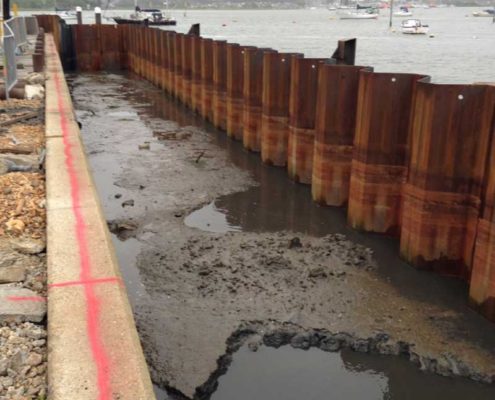 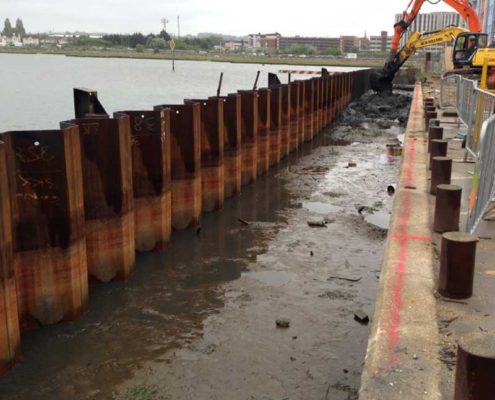 Extension to an existing quay that would enable deeper dredging to take place along this section of the dock.

Soil Mixing Aspect: With the installation of sheet piles to form the new quay wall, the trapped volume of marine silts and a peat layer between the old wall and the new wall presented several design issues. These came from the undue horizontal pressure exerted by the soft material and the long term settlement that would occur from placing fill on top of the soft silts and peat.

The initial solution was to simply remove this material and replace it with granular fill. This presented the main contractor with major issues in maintaining the stability of the existing sheet pile wall during the excavation of this material. Financially the disposal of the contaminated marine silt which also had a layer of peat at about 5.0m below quay level was extremely expensive.

While the engineering properties of this trapped material was very poor in terms of strength the soil mixing solution was to consider mass mixing all of the soft silt and peat into a consistent homogeneous material adding binders that would lock in any contaminants and at the same time improve the shear strength properties of the newly formed material.

Having provided budget figures for the solution the initial phase of works for DSML was to obtain representative samples from the site that could then be used in laboratory mixing of binders with the existing soils to confirm that the soil mixing could work and examine the range of possible shear values that could be achieved against the various cost of binders. Initial engineering requirements targeted a figure of 100kPa for the long term soil strength. Laboratory results showed that this was easily achievable and costs showed a significant saving to the project.

Not only was cost a factor but using the mass mixing solution eliminated the stability risk to the existing structure during this phase of the works, programme time was also reduced with the soil mixing works taking 7 days as opposed to a 4 week operation to excavate in short hit and miss sections while also having to import fill materials.

The site was adjacent to recently built luxury apartments on one side and the main RNLI glass fronted headquarters on the other side, while it could have been possible to install dry binders into the marine silts this was quickly ruled out by DSML in preference to a wet mixing solution and no danger of dust being released into the atmosphere. Concerns as to the best mixing tool for this narrow strip of work resulted in DSML bringing in the ALLU rotational mixing head working of a 35Tonne excavator. A suitable silo and computerised batching plant was chosen to fit the 5m x 10m compound area that was made available for the works.

Preparational works involved dividing the proposed works into cells and establishing depth to underside of the Peat layers for each cell. Site trial mixing was carried out in cell 1 to establish the most effective mix of water:binder ratio for this particular site. Mixing of one cell at a time then took place working from one end of the site to the other.

While the process simplifies construction methods additional long term benefits, not initially considered, are evident when, due to corrosion, potential holes may be formed in the steel piles and granular fill that would have generally been used as the fill material, would get washed out with the action of the tide. This newly formed solidified soil will retain its properties with minimal wash out taking place. This is yet another application that can be used behind existing steel piled walls that may be reaching the end of their design life.

Testing was carried out at 14 days with SPT probes and window samples taken to evaluate the new soil properties. Further information can be made available on request.

You can find out more about this deep soil mixing project at the RNLI website.