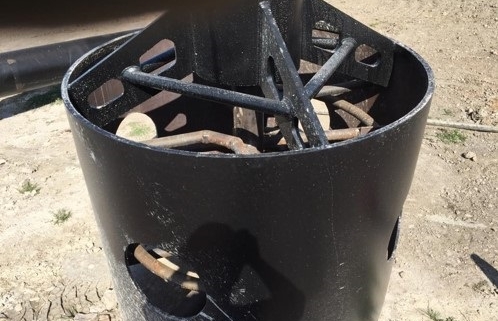 When considering soil mixing for a ground remediation project it is important to consider the equipment being used, in particular to look at the benefits of using a double rotary auger as opposed to the more commonly used single rotary auger.

Soil stabilisation contractor, Deep Soil Mixing Ltd’s Director Robert McGall developed a double rotary mixing head in 2010 and has since then continued to develop the mixing head design and techniques to further improve what is already a very successful system.

These trials proved that single rotary mixing was not as successful as the double or multi rotational mixing heads which are used on all Deep Soil Mixing Ltd projects.

Deep Soil Mixing Ltd’s bespoke double rotary auger system has twin paddles and these move in opposite directions to enhance the process of soil mixing with the distribution of the binder vastly improved and mix designs are more finely tuned and accurate in the soil mixing process. This in turn improves many of the geotechnical and engineering qualities of the mixed soils, more so than single auger mixing heads. This in turn brings economic benefits to the client.

From their R&D facility in Staffordshire Deep Soil Mixing Ltd have been working on the next generation of mixing heads and are now trialling these on site. The results from Deep Soil Mixing’s laboratory show the results are again proving that double or multi rotational mixing is far superior to single rotary action.

Innovation in soil stabilisation through use of Cutter Soil Mixer